Summer is over but that doesn’t mean we can treat ourselves to the occasional chilled delights, especially when they look just too good to ignore. For this issue, we’re going to review some cool new packing designs available in refrigerators across the retail stores of Karachi…ones that caught our sight and didn’t let go!

(NOTE: All brands mentioned below are produced locally) 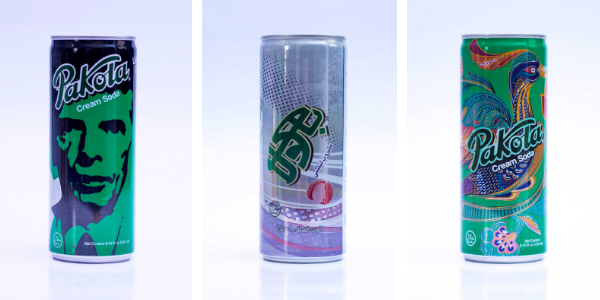 Many a times since the course of its conception, Pakola has been considered by most as the national soda of Pakistan. And since the brand itself isn’t blind to such public association, this year Pakola introduced 3 new 250ml can designs to celebrate Pakistan’s Independence Day (14th August 2017) and Defense Day (6th September 2017); along with a new design for its lychee flavored drink.

The printing isn’t the best, but the smooth feel and the vibrant shades of green make that irrelevant. Though each one is iconic on its own, the most outstanding one was the truck art peacock design; with the exquisite use of orange, yellows, blues and purple among the many shades of green, making the can stand out as the more desi than every other can in the fridge.

Nonetheless, this particular campaign really did bring out the green in me.

MUST: SIMPLY BOLD BY NURPUR 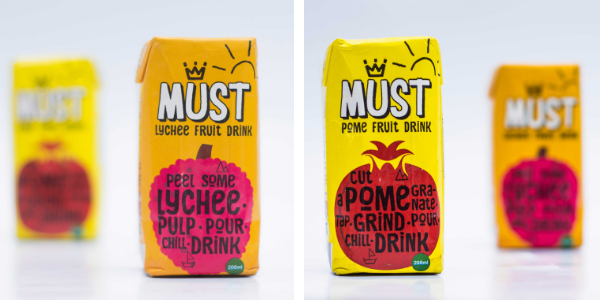 Among the clutter of juice boxes, cans and bottles; this small fluorescent box attracted me from afar. Simple and bold, the box carries nothing more than the name of the brand in a large bold font and a huge flat vector illustration of the fruit itself surrounded by a single bright color (a different one for each flavor) around the whole thing. The only extra text is within the fruit itself, in a way that it becomes part of the design. Overall the design is bold yet simple with a doodle or two around it, MUST really seems to understand the current international design trend and how to use it craft-fully for the Pakistani market.

The MUST fruit juice line comes in 6 flavors: Apple, Lychee, Mango, Mix Fruit, Pomegranate and Tamarind; which when placed together look like a packaged rainbow. And with that, they’ve managed to create the best design in their first packaging rollout attempt.

The cherry on top of it all would be the brand new telescopic straw that Nurpur introduced with all its boxed drinks. I really feel this is the next big thing after the bendy straw technology and I hope Nurpur owns this innovation before more brands start using it too. 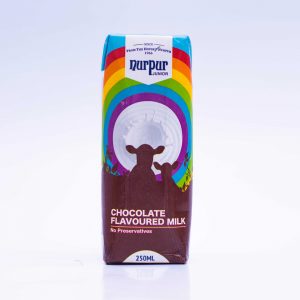 Simple, elegant and still fun for the kids, the Nurpur Junior milk packaging sports the new flat design trend which has been a norm with Nurpur since their rebranding. The flat circular rainbow is the calling card from afar and the line, “From the House of Nurpur”, above the logo authenticates the overall new design.

The milk comes in 3 flavors: Chocolate, Strawberry and Badaam & Zafran; and the company understands that there are better and more intelligent ways of depicting the flavor of the drink than just putting a picture of that particular fruit. The only pictures in the entire design is the splash and ripple of milk in the center of the rainbow circle, behind the silhouette of a  field with plants and goats, which does seem that it could have been done better. Otherwise, they have with them a perfect design.

SHEZAN ALL PURE: TO THE POINT 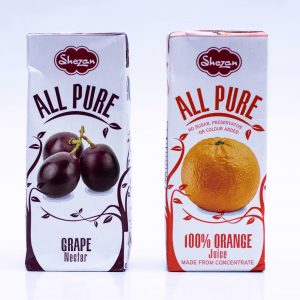 Shezan has been in the packaged juice market for a long time now, but their latest packaging overhaul to the All Pure line isn’t their best one. Yet it is simple and to the point. A large portion of the front is dedicated to the fruit itself; the rest is the company and brand logo, the name of the fruit and in some cases additional details; like branches and leaves patterned on complete white. Though clean and simple, this is a major step down from their previous package design of the ALL PURE brand.

The majorly white design tends to ward off younger consumers like children since it seems more of a diet or sugar-free drink. And even if the company did mean it to be for a target market of plus 20 then they could have done well without the leaves and branch patterns…it just feels a bit off.