As originally published in Synergyzer Issue 3|2019 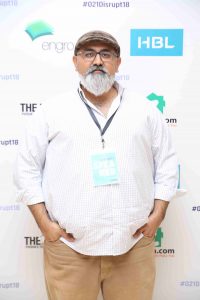 47 Ventures is the first international venture capital fund that is exclusively focused on Pakistan.

Why is there an exclusive fund for Pakistan?

At what stage does a venture capital fund come into the picture to invest in a startup?

Let me first explain to you the stages of a startup. The process is like a funnel. At the top of the funnel, there is the entire buzz, where startup ideas are encouraged as well as criticized and this is what gets the founders thinking. The next stage in the funnel is to have a supporting ecosystem of incubators and accelerators where the idea further gets filtered. It is after that, in the third stage that the startups begin seeking investments.

There are typically two stages in a startup’s lifecycle during which investment is carried out.

Stage 1; the very early stage when an angel investor invests their money. Although there are certain investors who may invest up to USD 50,000 to USD 100,000; angel investments are usually of a much smaller amount. Stage 2 is when a venture capital fund comes into play. A venture capital fund is an institutional fund, in which a number of investors – can be based around the world – put in 1% to 5% of their wealth, based on their risk appetite. For the investor it is a high risk investment, for it can be highly profitable but it can also result in a huge loss if the project does not work. So, the fund gathers investors’ money and creates an LP (limited partner) pool, where investors become partners with limited rights. The venture capital fund managers then employ their expertise in assessing and analyzing startups in an agreed upon geography and disburse investments effectively to generate returns in a specified period of time.

47 Ventures is that element in an institutional fund that is responsible for deploying and managing investments for, let’s say ten years, in startups operating in Pakistan and generate returns from them for the fund’s investors.

What role did you, as Country Director of 47 Ventures, played in the ecosystem?

I have been involved with Pakistan’s startup ecosystem since 2012, evangelizing entrepreneurship to fresh grads and professionals as a promising alternative career choice. Fortunately, a lot of people listened and incubators began appearing in major cities.

About three years ago, I began raising money to create a venture capital fund exclusively for Pakistan. As there was no such fund in Pakistan back then, I feel that I was lucky that the international investors responded to my call and saw the potential in the Pakistani market; our youth, our businesses, as well as our startup founders. Also, they showed confidence in 47 Ventures’ ability to manage their investments in these startups. This is how 47 Ventures was established as the first international venture capital fund for Pakistani startups. Now, as more confident investors are opening up their wallets, organizations including DFI’s (Development Finance Institutions), multilateral and bilateral foundations are appearing in the ecosystem. Multilateral being an alliance of three or more parties including international organizations like Bill and Melinda Gates Foundation, while bilateral funds are investments from governments of other countries brought through representative organizations such as UK’s government investing through British Council.

Thus, once we demonstrated that there is a need to put the money where the mouth is, other investors followed course.

Businesses may not always earn returns in the short or medium terms rather sometimes they start generating profits after no less than ten years of operations or even later. So, how willing are investors to invest in such business models in Pakistan?

There are a number of companies that are not very profitable but investors have been able to get a profitable exit out of them. When investors look for exit, it does not mean that they look for a company that has a positive cash flow and massive profitability within five years. It means that in five years, the company should be able to do an IPO (Initial Public Offering) and get listed on the stock exchange, or another company acquires it (strategic acquisition), just like Careem was acquired by Uber.

We want to invest in such businesses that become profitable in three to seven years because, unfortunately, there is not enough money in our ecosystem as there is in the USA. For instance, Uber has been subsidizing almost each ride since the past ten to eleven years with hundreds of millions of dollars already invested in it. But investors in the Pakistani ecosystem cannot afford to do that.

How do you gauge if a startup should be invested in?

We look at a number of factors before making a decision.

More than the idea of a business, it is the people who matter to us. So first and foremost, we build a thesis to determine the kind of team we want. For example, if it is a tech startup we are investing in then we ask questions like, ‘Is it just one person running the show or is there somebody with the techie to sell that tech as well? Do they have an industry expert on board who can help them in scaling the business? Does this team have the passion and the commitment? Are they resourceful? Can they manage the business on their own?’ When we are investing in a business we prefer a team of individuals completely focused on running the startup over those who might be corporate job holders during daytime and startup founders by night. And if we find a startup that can be on the right track with minor changes, we advise them to incorporate them in their setup, for instance getting a CEO or a CTO (Chief Technology Officer) on their team.

Thirdly, what matters is the potential of the business to make an exit. Although some investors are in it for the long haul and keep earning through dividends, but as I mentioned, we cannot afford that in Pakistan at the moment. Hence, we look for businesses that can give us our investments back within five to seven years.

Fourth, we invest in scalable business models. For instance, if a startup leverages technology to create a product where in the initial R&D (research and development) they require 10 or 100 or even 1000 people, they should be able to scale it across Pakistan or the region or even across the world without putting in the same effort or investment that they put in, in the beginning rather their effort should be minimized. Hence, this is where the technology takes priority.

Once taking them on board, do you ensure the survival of the startup till the time they can get you your returns?

We do not like to be overly intrusive in the operations of a business. Having said that, because we have a nascent ecosystem in Pakistan we try to facilitate them. For example, if you are a small Fintech in Silicon Valley you will not encounter obstacles when it comes to meeting people from the industry, but in Pakistan it is almost impossible for a 22-year-old youngster to have an appointment with a CEO of a major bank or an organization like say, HBL. Hence, sometimes we aid the founders in setting up appointments and at other times we act as advisors for when they run into operational challenges given our entrepreneurship background and expertise.

But personally, I prefer not to get too involved in a business because it is outright unmanageable. One can focus on mentoring two to four startups at a time but active involvement with forty to fifty companies is just not practical.

How do you keep the equation founder friendly?

We take significant minority interest in a business which is 30% or less share of equity depending on the capital involved. By not exceeding 30%, I believe, we diffuse the risk of founders being at the losing end of the deal.

In fact, we balance the equation for all stakeholders since we are like seed investors who become co-founders in a company. See, when you have a team of three where somebody is an industry expert, another is bringing their ability to build a product, and the third is bringing their ability to sell, an investor like 47 Ventures will bring the capital necessary to kick start operations. Altogether, the four stakeholders would constitute the founding team, dividing the equity four ways equally. That is the ethos of our culture.