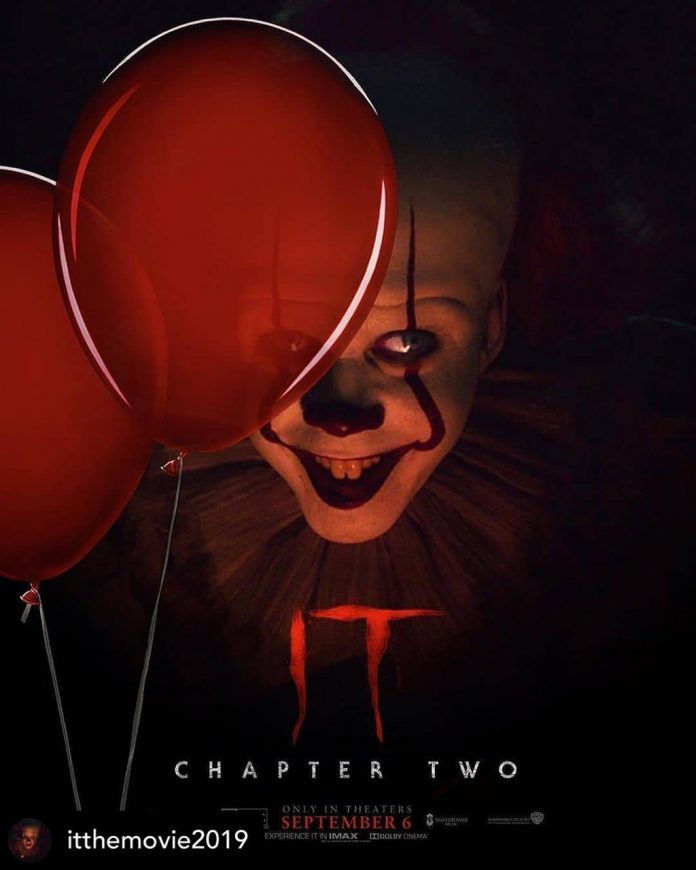 Box Office success IT released the trailer for its Chapter 2 on  9th May 2019.

The trailer follows the character of Jessica Chastain visiting her childhood home in Derry where she meets the new occupant of the place, an elderly woman. The meeting starts very sweetly where they reminisce about the past, but takes a terrifying turn almost suddenly hinting at the creepiness we can expect from the actual movie.

Following the release of the trailer, Warner Bros. employed a clever marketing tactic by utilizing the lead cast’s Instagram accounts. As all 6 actors uploaded photographs of themselves that on the first look seemed casual snaps, people started noticing a lurking (red) balloon in the background.

Chaplin and I weren’t on speaking terms when this photo was taken. He tried to roll in a pile of garbage, and I strongly advised against it. He’s a total 🤡

2. Okay, James McAvoy’s’ caption is pretty clear but you get what we mean.

4. Look behind you Isaiah!

When the dungeon master catches you outside on the phone during a D&D game. #brb #busted

5. Andy, ITs outside the window (pun intended).

Zen and the art of morning dishes

Marketing through Instagram has gathered attention ever since Ryan Reynolds for his Deadpool franchise and Detective Pikachu employed the platform for their respective promotions. ‘IT‘ seems to be following suit, though their current strategy includes a lot of effort by the fans who would only connect the dots if they are familiar with the balloon and its connection to the first installment of IT.

The creative promotions for IT is not an out-of-the-blue phenomenon. Back in 2017 as well, Warner Brothers utilized Comic-Con San Diego as they employed Grandesign Media to create a rundown bus for the fans. The chairs of the bus spun 360 degrees and the Virtual Reality headset allowed them to take a look inside the clown, Pennywise’s house.

Let’s see what more creative stunts they have in store for this sequel.

Watch the full trailer below.