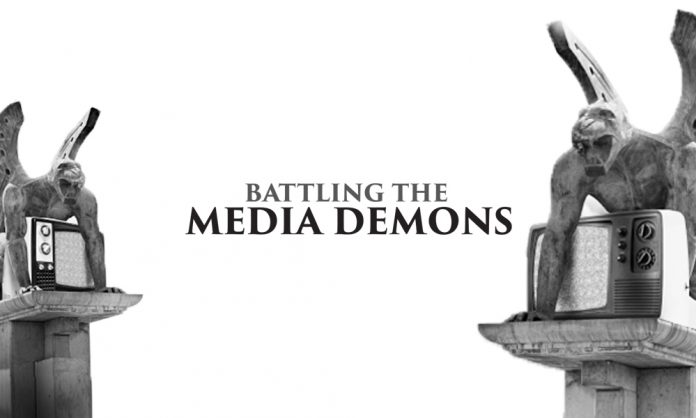 The current Government came into power with the agenda of eliminating corruption. In line with the mandate of reducing corruption, Information Minister Fawad Chaudhry in his address to the nation, highlighted issues within the media industry that had ensued from the media policies of the previous government. He emphasized on how the government had allowed private TV channels to charge the government multiple times higher than what they charged corporate clients. This allowed private TV channels to become the Government’s PR tool in exchange for the channels earning abnormally high, the payments for which were coming from taxpayers’ money.

Secondly, he also mentioned that the survival of the electronic media industry depends on the media organizations being at par with the constantly updating global technological challenges and international regulations.

The information minister, hence, announced some immediate measures the government is taking to deal with the problems within the media industry:

Since news, entertainment, and social media is already converging to cellphones, there is no necessity of monitoring them through three different organizations. Hence, with the formation of PMRA there will be one body that keeps a check on all avenues while also coordinating with international bodies.

According to Fawad Chaudhry’s statement, more than the suspension of government advertisement, it was the business models that were ruining media organizations’ businesses. Hence, he stressed on adopting OTT (Over the Top) platforms that are emerging across the globe. In the electronic media context, OTT content platforms are used for delivering TV and film content through the internet, without requiring users to subscribe to traditional cable or satellite pay services. Therefore, if Pakistani businesses failed to stay abreast, they will lose more of their market to international players.

Furthermore, to align the industry with modern media practices, the Government has decided to launch a media university that will have TV, radio and print academies under its aegis. The main focus will be on technological and creative media education with an aim of producing talent that is at par with international standards. The Information Minister has also advised students to pursue relevant degrees, so that they can be a part of the fast-paced digital world.

Hence, the focus of the Government will be on modernizing the regulatory body and aligning it with international regulations. But now, it is the local industry that has to put its act together and form a strong representative body which can advise and guide the Government, in securing the industry stakeholders’ interests.

As of right now, the media organizations are facing a downturn, consequently, laying off a huge number of employees. While the reasons leading to this have been discussed in the sections that follow, this situation has been compounded by the TV channel’s inability to cope with challenges posed by the government’s decision not to advertise on private TV channels as well as the declining economy and increase in US Dollar rate.

HOW THE MEDIA INDUSTRY LANDED IN A FIX

Until 1997, there were more than 50+ advertising agencies competing in the industry.

In 1997, Pak Mediacom (now Starcom Mediavest Pakistan) was incorporated as the first media house that would focus entirely at Media Planning and Buying. In 1999, the Mindshare franchise (now a part of GroupM Pakistan) was also established in Pakistan. While Pak Mediacom signed P&G Pakistan, Unilever Pakistan was taken on board by Mindshare as part of their global alignment.

This was the time around the year 2000 and after, when more and more new TV channels were emerging in the Pakistani media market. Consequently, local advertising agencies started expanding their services towards media planning and buying.

Due to its association with WPP, Mindshare Pakistan introduced efficient management systems and procedures, advanced planning tools, access to resource portals, and training workshops for their staff; which helped them establish a forte over other advertising agency-led media planning and buying houses, even the ones who had affiliations with international groups. Later on, it also expanded its portfolio and took on other major advertisers like PepsiCo. Then, when the need for clients grew they launched other media agencies in order to sign conflicting clients, for example, Nestle. Hence, their client list has kept on growing.

Likewise, the other major player Starcom, which is affiliated with Publicis Group, has been successful in capturing the market based on access to international tools and by implementing business models that can be termed ingenious. Alongside P&G Pakistan, they have a number of MNC’s and local brands on board. At present, a major part of their revenue is coming from the Lahore market with Coca-Cola Pakistan as a major client.

GroupM and Starcom both introduced a number of industry firsts such as convincing TV channels to expand transmission slots in order to provide multiple viewing slots throughout the day, especially for women, consequently creating new advertising slots. They also introduced the practice of Bulk Discounts, against bigger client investments and favorable payment terms leading to an anticipated higher revenue for TV channels.

Soon, this business model started being followed throughout the industry. Consequently, the whole media industry capitalized on the ensuing benefits as much as each player’s scope and capacity allowed. Amidst all this, the media industry enjoyed a decade long boom period yet missed out on predicting the future, where these business models were allowed to prevail within the media industry without any regulations or checks and balances. Hence, the industry started experiencing the negative consequences of approaches like giving bulk discounts and low commission that had yielded benefits earlier.

The situation further deteriorated due to the continuous and still prevailing absence of any regulatory body. According to conservative estimates, GroupM owns approximately 47% of the advertising pie share, while Starcom is at approximately 27%. This leaves the other 40 plus agencies to share 26% of the entire pie.

This situation can only be made better if all stakeholders sit together and work towards the standardization of rates, so that it becomes fair play for all.

AN ATTEMPT AT SORTING OUT THE SITUATION

Who are the Stake holders?

What are the Industry Challenges?

A strong solution is the standardization of media rates, which can be done in two ways:

Method 1: Standardization of rates for all media agencies.

Method 2: Standardization of rates for advertisers as per their spend bucket.

The first proposition can be substantiated with the example of Pakistani print media. Dawn and Jang newspapers, the two leading market share holders, kept their rates standardized for all advertisers irrespective of their size and did not bow to the pressure of agencies. This helped in retaining the size of the medium, creating equal opportunities for all buyers.

To implement the second methodology the industry will have to allocate rates according to spend categories. For instance if an advertiser has more than Rs. 1 billion ad spend, say which is highest in the television media industry, they will be assigned, say rate A, according to which they will pay a certain per minute airtime rate which can be less than the rest of the advertisers due to their being the highest spenders. Likewise, advertisers with ad spend between Rs. 0.8 billion and Rs. 1 billion, are assigned rate B.

While these methodologies are implemented, balancing clauses should be introduced that ensure that benefits are not tilted towards any one side while the other is at the losing end, safeguarding the interests of advertisers, agencies and media alike.

b. Introducing Other Streams of Revenue

Media owners as well as media agencies need to revamp their business models or they will get irrelevant. For example, if TV channel owners’ introduce a subscription based business model through Direct to Home (DTH) connections then they will have an additional stream of revenue just like print. 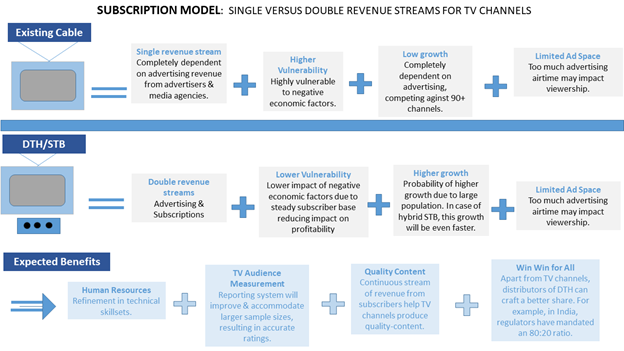 There should be mechanisms through which the weight given to buying efficiencies can be balanced against other services offered by media agencies. This may include tools for delivery of comparatively more relevant media KPI’s as well as ROI substantiation, instead of the cheapest-rates-only approach. These will not only reduce pressures on TV channels for reducing rates but will help TV channels get out of crisis, while also helping agencies focus on services more critical for brand health. Also planning systems and related procedures can be used to ensure that brands get seamless services from their respective agencies.

In this connection, some advertisers have realized that price centric media practices are not very impactful. Hence, now they have begun looking for relevant KPI’s which can help attain their marketing objectives. When carrying out strategic media planning, the macro-level objective needs to be kept in mind. They look for strategic and tactical assistance from their media agencies; and gauge the impact of advertising on various levels of the brand funnel based on targeted marketing objectives. This not only helps the campaign retain focus, but optimizes advertiser investment as well. These services may include the usage of more advanced tools, like Consumer Multimedia Index or Brand Health Trackers for segmenting and profiling target audience, and to gauge the health of the brand, aligning media investment against set targets.  A number of local and multinational research agencies offer these products and media agencies can take the initiative of incorporating them in their service structure.

As a result of this approach, agencies will improve the skillsets of their employees while support industries like media monitoring, communication research etc. will start growing again, the size of advertising expenditure (ADEX) for TV channels may grow due to improved business.

It is important that the media industry has a strong regulatory body that can safeguard interests of all stakeholders: Advice the government on its policies, regulate international practices in the local market and protect industry stakeholders from the effects of any kind of monopoly, ultimately alleviating the polarization in the industry. This can be ensured if the regulatory body has representation of all direct and indirect stakeholders including that of existing organizations, for instance PBA, PAA, APNS, PEMRA as well as CCP (Competition Commission of Pakistan) etc., who can help keep the regulatory body on track.

Furthermore, it is important that the jurisdiction of the regulatory body is not limited to television only. It should have command over all communication channels like Print, Radio, Digital, Out-of-Home (OOH), Cinema, Public Relations etc.

CHALLENGE 2: DIGITAL MEDIA AND ITS IMPACT ON TV

WHAT IS CREATING THIS CHALLENGE?

The local industry has to modify not only television, but also local digital communication channels since they are becoming more and more interconnected. Digital transformation has to be regulated in such a way that it favors our local industry more than the international players.

Following are some solutions that may counter the challenges ensuing from digital transformation:

The idea behind the discussion in this article is to map out solutions to challenges that the media industry is facing, which are becoming a source of its regression rather than delivering critically thought out opportunities. It is important that the solutions are strategically applied so that we do not end up retrogressing to the catch-up mode over and over again.

The views and opinions expressed in the article are not necessarily those of the publication.